Frankly, robo-advice is not a „true innovation“ as some tend to put it. Is is a new channel for services that had been reserved to higher net worth individuals given scarce and expensive advisory ressources. Thus, it is another example of „democratization“ reducing or even removing barriers to entry on either side. Easier access for a broader range of clients and a broader range of providers requiring less limited capacities. On the back of this we should rather think of Volkswagen’s Beetle bringing cars to the mass market. True „beetlization“ might therefore be a good fit and holds well when digging into the different offers. With some € 1bn assets under administration the German market still appears in it’s childhood, but already crowded by numerous offers even before the bigger banking groups seriously started market penetration. Thus, there might come much consolidation alongside substantial growth. 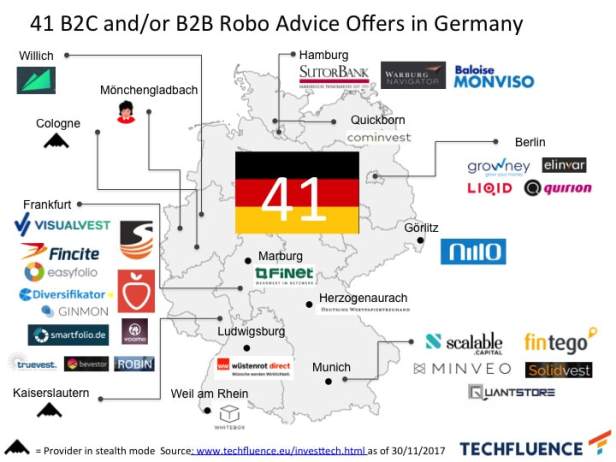 Since the beginning of August the number thus increased by another 10. With low barriers to entry Robo-Advice can leverage the existing capacities in asset management. As the bigger banks and banking groups aare still in a very early stage a further increase can be expected

Different approaches in the market

TECHFLUENCE listed 41 market offers including stealth mode. Assets under administration are estimated at some € 1.3 bn, up from € 850m at the beginning of August, still a tiny share of the German financial market. As only few providers publish there figures and as the offers are somewhere inbetween providing tips and regulated asset management „assets und administration (AuA)“ appears more appropriate then „assets under management (AuM)“. 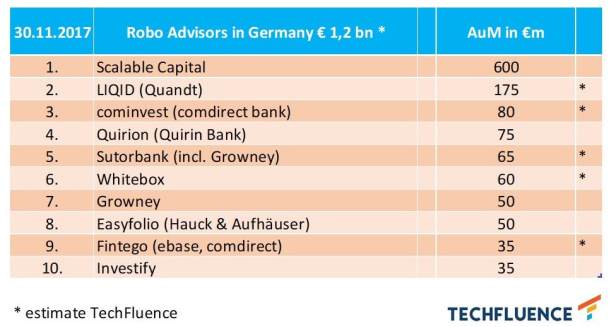 Only two providers have already passed the mark of € 100m AuA. In particular the big players among German financial services groups are still in a very early stage. Bevestor from the savings banks just started July 2017 and wants to gain momentum in Q1 2018. MeinInvest from the cooperative banks was just rolled out in a few banks. Commerzbank´s online arm Comdirect rolled out „cominvest“ in May and acquired € 100m in the first two months and another € 50m in Q3. For the time being Deutsche Bank only acts as a white label provider and recently launched a different concept branded ROBIN. Just to compare: In the U.S. Betterment recently passed the USD 10bn AuM. 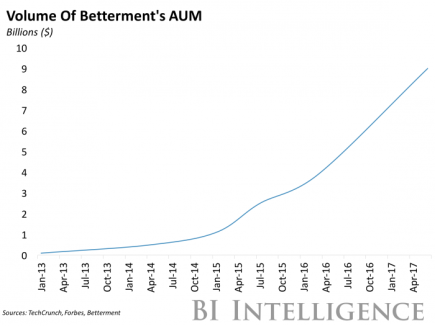 www.statista.com estimated the market in U.S. at USD 500bn for 2017 and expects a growth to USD 2,2trn until 2020. Again rather AuA than AuM as this figure includes a wide range of automated and hybrid offers.

How things develop with bigger groups entering the German stage can be deducted from ING-DiBa, the third biggest retail bank in terms of it’s 8m client base: As of Sept. 15th the bank launched a cooperation with the German arm of Scalable Capital. Within the first ten weeks some 7k clients moved € 150m to online investments. Thus Scalable’s AuM were boosted beyond € 500m, no. clients grew to 15k. Alongside, the company disclosed some interesting demografic details: Clients are around 50 years hold and 90% hold an academic degree.

Much diversity in the market

„Robo Advice“ is rather a genus than a species as the offer range from unregulated tipping to asset mangement licensed by the German banking supervisory authorities.

A lack of transparency on the provider’s causes potential risks for investors as unregulated offers might suggest features that only regulated asset managers could provide such as hedging strategies. Unlicensed provides can only inform clients, not trade on their behalf. This might lead to some annoyances, in particular when markets become tougher. A good insight (in German) is provided here: Robo Advisor – Test und Vergleich 2017.

Looking into a set providers reveals a widespread weakness. Expectations and market projections are not an issue. Instead of projections, only a historical performance is provided. But nobody should expect to see the last 15 years being repeated with stock markets more than doubling and bonds at historically low interest rates. Thus, time horizon is very relevant to achievable yields and should not be set aside. In addition, approaches to risk management are ranging very widely.

Investment approaches not that creative

Surprisingly, only few providers offer thematic investment. Opposite: The broader offer „MeinInvest“ recently launched by the cooperative banks comes along without the „green“ investments offered under the „VisualVest“label. Currently only investify highlights thematic investment. This is even more surprising that the German market is underdeveloped with regard to responsible investments for the retail market. And it would be quite simple to get started by using sustainable ETFs as Betterment in the U.S. recently introduced.

A lot of Consolidation to be expected

As the bigger retail groups are in an early stage and the total market is below € 1bn AuA a lot of consolidation will come alongside market growth. In addition, compared to a total of 71 providers in Europe Germany is already a crowded market with numerous small players. And the there are some flawed offers, which may hardly survive, esp. when the big players become serious. Cominvest just provided an example how the market entry of a better known bank might work out.

Robo Advice has low barriers to entry as the technical base costs some € 100k to € 200k with regulatory expenses on top as a B2B provider put it (In German: Oliver Leipold: Massive Konsolidierung im gesamten Markt für Anlageberatung, in: DAS INVESTMENT, 8.8.2017). Thus, not difficult to guess that the picture of the German Robo Advise market very soon might be a completely different one.

This view is supported by the most recent announcement of launching „Zukunftsfonds“ (future fund) by a former editor in chief of German yellowpress „Bild“. Partnered by Leonhard „Lenny“ Fischer, a former bank manager and with the ambition of no less than € 20bn he intends to set up a balanced product supported by educational content online. While the educational approach appears to be sensible given the low knowledge base of retail clients the targeted size appears to be overstated given the volumes managed by funds, only hardly passing € 10bn AuM.

At the end of November 2017 Deutsche Bank launched the Robo Advisor ROBIN which appears to be quite different from MONVISO the solution provided by Deutsche Asset Management and sold as a white label via Baloise Group. Two self-exercises led to strange results with extremely high liquidity despite a 10y time-horizon suggesting markets to crash soon. Anyway, as the market entry was extremely quiet this is suggesting more noise to come.

With low barriers to entry further market entrance appears likely such as ABN Amro recently launched Prospery mainly leveraging existing capacities of  ABN AMRO Investment Solutions. Without fixing an amount, but based on high basic fees it mainly targets clients with investable assets of more than  € 100.000.