Mapping the evolving FinTech industry rather reminds me of old-style pattern bows in the fashion magazines of my mother. They hardly provide a clear picture or map for navigation. Looking into various businesses did not necessarily reveal innovation, even at numerous glances. I found a lot of old wine in new bottles asking myself for driving this and justifying the impressive efforts and financial investments. However, reading Chrsis Skinner’s blogs on “The Finanser” is inspiring anyway. Two recent ones took me to a new and fresh perspective on the world of FinTech. To my own surprise a more historical one.

The legacy of early automation

As a banking analyst presenting research on German banks I was saying that German banks‘ IT reminded me of museums showcasing automation over the past 4 to 5 decades. This heritage seemed to be one major fact explaining the unfavourable cost/income rate of German banks. As Chris puts it: Banks “…want to get to the nirvana of new technologies, but are stuck in a spaghetti of old systems” (https://thefinanser.com/2017/07/fintech-start-ups-think-can-beat-banks.html/). They are hardly trying to transform into clearer structures (i.e. some sort of noodle casserole or lasagne at least). For example: Deutsche Bank started not before 2015 to consequently renew it’s IT for retail banking. Thus, is FinTech the way out of legacy? To a certain extent yes, but not a sufficient condition for the evolving FinTechs despite all incubators, cooperations and investments by the different banking groups.

Key to my refreshed view was Chris Skinner’s argument, “that “…the most successful FinTech firms are not replacing banks, but serving markets that were under-served” https://thefinanser.com/2017/07/fintech-start-ups-think-can-beat-banks.html/. Or put it rather un(der)served. Full stop, that’s it!

Un(der)served does not necessarily mean „lacking“ or „scarce“. Services can be neglected, overprized or inconvenient. This seems to apply to foreign payments and currency, where German banks refrained and left the field to fokussed specialists earning decent margins. And this is the starting point for some bigger scaled start-ups such as 1bank4all and Revolut in Switzerland. Or ProCredit Bank that was in Germanyvlicensed 2011 offering cheap payments to Southeastern Europe.

German retail banking has not experienced so much consolidation from a perspective abroad. Most took place intra-group (cooperatives, savings banks), the rise of ING Diba and a number of Landesbanks to vanish. Only few prominent mergers such as Commerzbank and Dresdner and few market entries such as Santander.

What are the most common roots of today´s players? Indeed, the majority of the prominent market players today were founded to cover unserved needs! Cooperatives, savings banks, Postbank and even Diba were set up in order to serve customers not covered by the banks. – N.B.: Commerzbank and Deutsche Bank were founded to cover needs that were unservable by the private bankers when industrialization took up momentum and bigger tickets became necessary. – Thus, an important lesson from history provides the essential approach for innovating today´s markets!?

The global perspective on the financial sector(s)

Now the second inspiration drawn from Chris Skinner’s blog suggesting to see the global financial sector is a three-steam world: “For me however, it illustrated a different conundrum. Whilst the United States and Europe are wrestling with legacy systems, I see China, India and other growth economies leap-frogging their counterparts thanks, in part, to implementing systems after Mark Zuckerberg was born.” (https://thefinanser.com/2017/07/three-stream-financial-world-one-watch.html/) And indeed: In researching European banks we found out that cost/income was systematically lower when automation took off later! (Alternatively, but only in some rare cases when IT was restructured more rigorously).

The third category/velocity mentioned in the blog brings it to the very point: “Meanwhile, a third trend is occurring, which is the rise of mobile payment and wallet innovations in the developing and emerging economies.”

To divide the banking world into Western legacy, Asian growth and Southern development helps me through the FinTech world finding out what may be an innovation or not, erasing the unnecessary from my pattern bow hopefully providing me a useful map for orientation! Adoption rates pretty much support this approach: 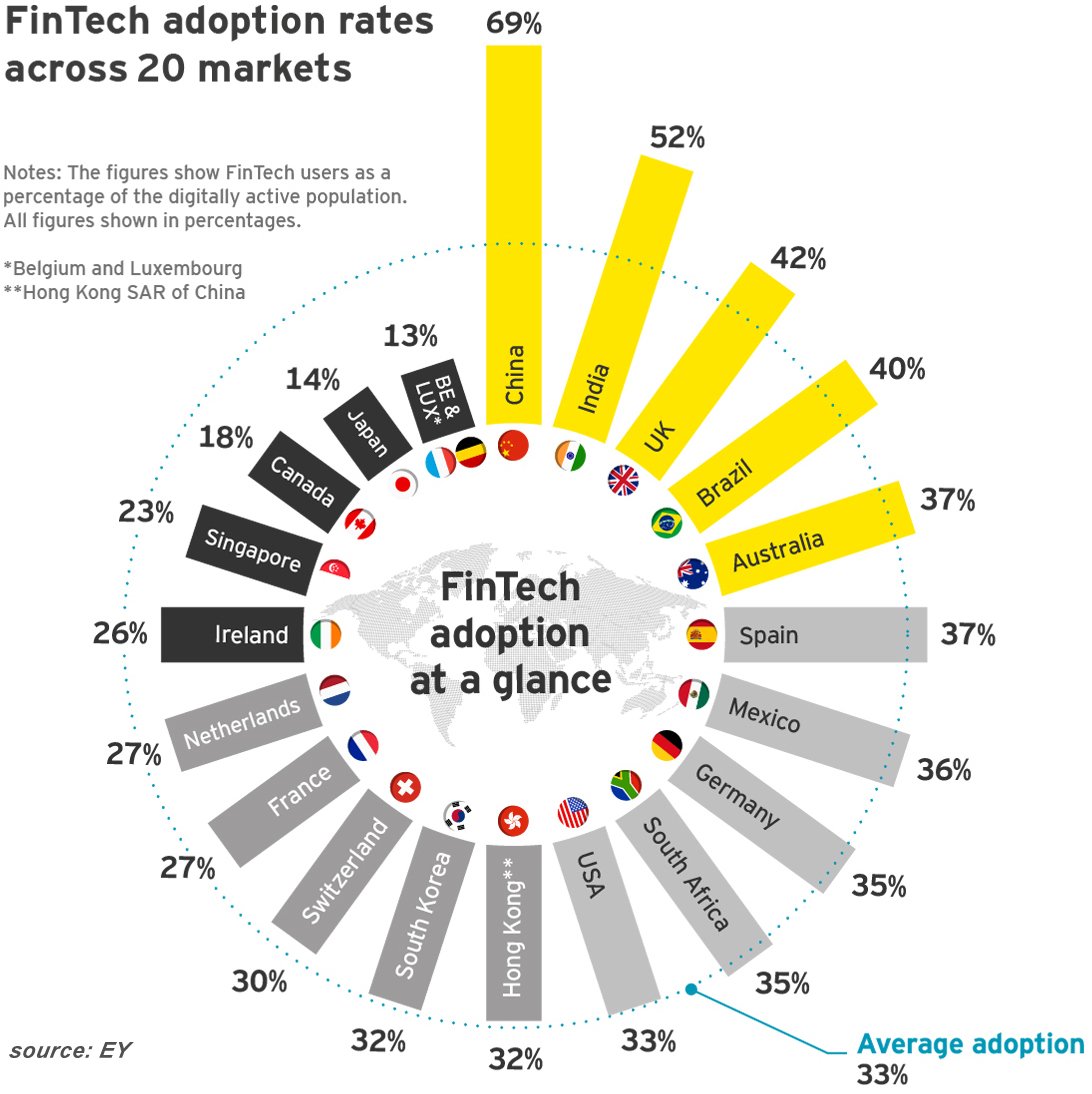 I acknowledge, a lot of money was made from inventions on things nobody really needed, but these things were usually short-dated. Just think of Pokemon Go and other things. This does hardly apply to financial services. I will look out for offers that at least democratize product offerings that have been reserved from the targeted clients. As a rule of thumb to guess on potential success of upcoming FinTech this seems to match with all steams. On the back of this I reviewed my files and indeed, I found some really innovative ones and worthwhile for closer look, in all three spheres of the financial world, under all three steams.

Some days after the first publication an alternative assessment came up: You may well forget about all history and „state-of-the-art“. Just check out whether an idea might positively impact sustainability. Any proposal matching with at least one of the sustainable development goals should have a fair chance to succeed. Or as Gary Fegan was putting it in a tweet (@Fegan): „Solve a real world problem by delivering a service that isn’t available and covering it end-2-end“.

Ein Kommentar zu „Guessing on the success of FinTechs“