Comes along like a fantasy: 200m inscriptions within six months penetrating a customer base of 450m in China alone. Impressive, instructive, entertaining and sustainably impacting at the same time. Calling for all options state-of-art IT offers for a FinTech today. 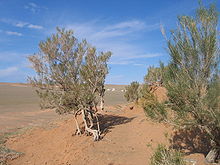 GDFA complements Green Invest, initiated 2013 by G20 as a platform for dialogue (2017 presidented by Germany). Core and currenly only project is Ant Forest.

Registered used get an additional CO2-account for CO2 relevant daily (payment) activities, e.g. using public transport or walking instead of taking a car. Estimates for carbon savings were developed with the carbon exchange (China Beijing Environment Exchange, CBEEX). Symbol for credit gained in terms of carbon missions saved is a virtual tree.

When the virtual tree becomes adult Ant Forest is providing carbon offset rewards through a physical tree planting programme in Inner Mongolia in order to stop desertification. Until January 2017 already 1m trees had been planted.

In harsh contrast to other rapidly spreading trends s.a. Tamagotchis, Skoubidou, Pokemon Go) can Ant Forest leave a positive impact even if interest declines or diminishes as a trees remain hopefully in place. Unfortunately no further information on the development in 2017 has been disclosed yet.

With 200m in January 2017 inscriptions Ant Forest already penetrated 40% of Ant Financial user base equalling some 20% of China´s adult population. As 60% of the inscribers are 28 years or younger there is some likelihood that the campaign might sustain. As younger people seem to be more open for impact towards environment and poverty Ant Forest responds to a strong global demographic trend.

The full Box of Tools for a FinTech used

Ant Forest exploits the full range of today´s state-of-the-art in information technology social media and gamefication included. And it responds to a strong trend in financial behaviour just stated in a new study from study from Morgan Stanley.

Of course, Asian financial markets run at a different steam as societies do. Nevertheless, Ant Forest provides a good example of a FinTech exploiting a full-fledge arsenal of modern IT and trying aim at superior goals for a sustainable development going forward. Not the worst approach how to check for success.